Let us at TheRealCycle draw you the ugly picture of reality. 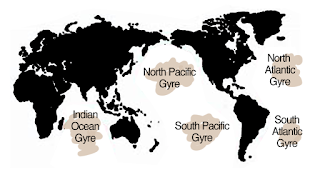 We have to attack this problem head on and put this problem front and center. Not hiding it, and making believe that it doesn't exist. That's why we are here drawing you this very ugly picture. Because if you get involve and get on board, we can make a dent and help to create a chain-reaction and will eventually slow down the growth of one of these Gyres. I'm a firm believer than the only reason that these Gyres have gotten so big, so gigantic is because not enough people are aware that they even exist.
.
We are not about just having fun while creating art, at TheRealCycle.com, but we are here also to try to inform people of this crisis... way too much garbage. Just one of these Gyre (circular patch of mostly plastic debris) is the size of the state of Texas. That equals to 700,000 square kilometres or 270,000 square miles. And there are at least five Gyres in the ocean. They are in the South Atlantic, North Atlantic, North Pacific, South Pacific and in the Indian Ocean
.
I believe you'll want to join us if you see that by making small changes in your life it could have a big impact. We want you to look at garbage differently. First you should notice [it] as a threat to our health. When [it] is in the oceans it breaks down into smaller pieces of plastic, fish eat the plastic and we eat the fish that eat the plastic. Secondly we believe that same garbage can be also seen as possibilities of the things that can be reused and re-purposed to create the new.and exciting piece of art.

We think that after people notice how big of a garbage problem we have, they too will want to do something about it. We are here to give you creative ideas of how to create something that can be fun and fill you with feelings of fulfillment. By simply saving certain items from being tossed into the landfills and/or our water supply. Did you know on the average every person produce one and a half pound of garbage?

At TheRealCycle.com we are not selling refurbished stuff, we are not fixing it up, cleaning it up and selling it. No, we believe in making a statement and being creative. The items that are used must be used in a totally different way that it was supposed to be used for. We want to start people thinking out-side the box and doing more with less, and having fun doing it..

We know that one good idea can spark another great idea. When we all start thinking creatively there' s no stopping us and we can share the ideas and thereby creating a snowball effect. That we might even come up with a doable solution and a unique approach to attack these five Gyres, they won't go away by themselves.

We plan to take back our beaches and our oceans. The same way one piece at a time ends up in our ocean in our beaches because of the currents. We plan to take them back... one piece of garbage at a time. The piece of art that you create combined with our help to guide you and many other artists doing art from plastic and paper that was rescued from the landfills or worst from becoming part of one of these five giant floating Gyres.

We at RealCycle believe that if we make it easier for people to find recycled items equivalent to the merchandise they buy. They will buy the recycled counterparts instead - since they will know they are helping the cause. We believe that by making it easier and more accessible to buy recycle items is key, it will start to lower their prices and the general public will get involved.

We can start attacking the problem or we can just keep burning up money like there's no tomorrow, because pretty soon there won't be anything left.

Popular posts from this blog

How we can become a ... If our (The United States) goal is to be a "Zero Waste Nation " - we can start by following what Sweden is doing with their garbage. Turning Garbage Into Energy Please see this video   Waste to energy program that actually works. If Sweden can do a successful job of recycling we in the US can do it as well. In Sweden only 1% of the trash goes into landfills.
Read more

One stop shopping, one click and you’ll find everything and anything made by recycling creatively.

These are some of the categories you'll find that we cover. I believe that if it has to do with recycling...[it] should all be on one web-site, all in the same place.   I found while doing research that it is hard to find some of the super cool stuff that is out there, made from recycled items. I found out it's not that easy to catch the recycle bug. I'm not talking about recycling bottle and cans, that's all fine a dandy and yes if you are doing that please keep on doing that, it does help. You can even go to the extent of living in an environment friendly home and driving an environment friendly car. Why am I doing what I do? I believe the easier it is for consumers like you to find items made by recycling manufactures and artists. The more those manufactures will sell, the more they sell their products, the more the prices will come down. Making those initially pricey products more mainstream. That everyone will be able to afford them, this will even out
Read more

Embracing The Real Cycle
I'm in the process of creating a hub on the web for creative recycling artists. The only restriction is that the items have to be use in a totally different manner from their original intended usages.